There's a device hanging on the wall in the bathroom at work. Last week it beeped regularly for a couple days. Then today I was in there... er... reading the paper and I hear this noise like a pop can being opened.

OK, that's weird, I think. What the heck was that? Then I notice the potpourri scent waft through the stall. Ah, I get it now -- the thing on the wall's an automatic deoderizer.

Then I get a little paranoid. Does this thing go off regularly, and I've just never heard it till now, or is there some kind of "ass detector" in the thing that decides the air is just too foul, and releases a spray of potpourri? 'Cause I'd be a little self-conscious if my dumps were so bad that not even a computer could handle being around them.

The guy who showed me the apartment Tuesday night showed me the wrong one. It's an apartment building so any two apartments will be pretty much alike, but I'm still taking a look at the one I'd actually be renting tonight (Wednesday). For all I know, this is where the cat guy from my apartment moved to after he left the piss-soaked rugs here.

But odds are the apartment's fine and I'll be looking for people to help me do some schlepping come the middle of July.

Everyone's Got a Story

Remember that Times reporter who got caught plagarizing just about everything he wrote for four years? Turns out he wants to write a book. I just want to know who's going to write it for him.

Just overheard the guy in the cubicle next to me use the word "yinz" without a trace of irony or derision. I think he may actually talk that way.

And to think I've spent all these years avoiding the butchering of the language that goes on here, just to work 10 feet away from it all day. I'm going to be going to the Dahntahn Primmani's for a sammich and an Ahrn in no time...

All in all, pretty damn good. The fight scenes were impressive. (How do you make Agent Smith a match for Neo? Make a few dozen of him.) The explanation for the Oracle didn't make too much sense when it was first explained (although it does make sense given her abilities) but when Neo has his talk with the Head Honcho at the end, it comes together a bit. Seems like they're setting us up for quite the mind-job in Revolutions.

The only real problem I had was with the pacing. There's so much setup work that needs to be done for both this movie and Revolutions that it seems to just plod along, with some Bitchin' Kung Fu to keep us all awake. The massive party scene in Zion I could have passed on, and I'd much rather have seen Carrie Anne Moss's naked butt than Keanu Reeves'.

Once it got going though, it was a pretty damn good ride. I just wish the final scene hadn't all but put a huge "to be continued" on the screen -- it felt like a cliffhanger episode instead of a movie.

On a Cold and Gray Chicago Morning...

Got my front window to open. 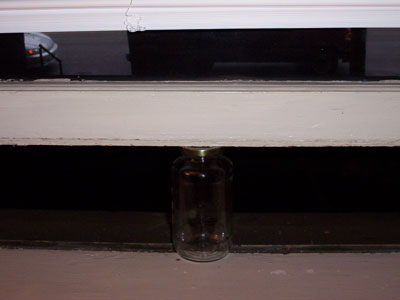 Yes, the jar's there for a reason.

And hey... with this nice, heavy rainstorm we've got water seeping into the basement! Which means there's a large wet area at the bottom of my stairs! Guess that explains where the musty smell's been coming from.

While I was at AutoCAD training last week I got an e-mail from the one of the other engineers at work. It was about some files I'd copied to another directory for a project, so I could do testing on them.

Y'see, when I right-dragged the files to the new folder, I must've missed "Copy files" and landed on "Move files" instead. Meaning that when somebody went looking for them they couldn't find them. Oops.

She was able to solve the problem quickly, and then sent a "you dumbass"-type e-mail to me, saying not to do that. No problem, I didn't plan on doing that at all.

So I felt like a pretty big cluebag for a little while. Then I read about a baseball player named Trot Nixon and how he can't count to three. I may still be a dumbass, but I'm not the world's biggest dumbass.

Well, it's become obvious that the blog is drawing all my creative energies (and I don't have a lot to begin with) to the detriment of everything else here. I'm thinking of moving the blog to a more prominent place and de-emphasizing the rest of the junk here.

In fact I'll probably wind up dropping a lot of it that I don't really find all that useful/amusing any more. I'm also going to dick around with the layout of the blog, and make it a little more accessible from the outside world -- something like jasonfleshman.org/brain_farts/2003/05/12 for a daily, .../2003/05 for a monthly arhive, etc -- which will require a little bit of heavy lifting on the behind-the-scenes stuff. (What can I say, I wasn't all that good of a programmer two years ago.)

I'll do what I can to keep links functional, in case you wasted enough time to bookmark something.

Well, they're fucking around with the money again.

I'm taking AutoCAD training the rest of this week, and Thursday and Friday of next week. Five days total, 9:00 to 4:00. On the one hand, this bodes well for my contract being extended -- I doubt they'd sink the money into training me if I'm going to be gone in 4.5 months.

On the other hand, I'm already about to kill half of the people I'm taking this training with. These people can't possibly have ever operated a computer before. And to help push and prod these idiots along, the instructor is going through every step in excruciating detail.

For what I learned today, I could've been out of there at 11:00. When I'm at work and need a break, I can surf the 'Net for a couple minutes. There, all I can do is play Solitaire and Minesweeper. Over, and over, and over again.

No certificate is worth this annoyance. I'd rather be at work.

So I dug through the paper Sunday to find myself an apartment. I see a one-bedroom in Squirrel Hill; $595 a month with the utilities included. Sounds good to me.

I call the guy, and I'm thinking this voice is familiar -- did I look at this apartment last year? Then he says, "it's on Loretta St." Couldn't help it, I started laughing -- it's my old landlord, renting out the apartment I had to vacate last year so he could remodel. And he bumped up the price $120. It's not exactly in Squirrel Hill -- it's about 3 blocks on the other side of Beechwood Blvd. -- but it wasn't a bad place. He wants to fill it immediately, though, and I wouldn't move in for more than two months.

And now I'm gonna have "It's a Small World After All" playing in my head the rest of the day.

From an e-mail: You know the world's turned upside down when the person shooting college students at an Ohio university is an anti-war protestor.

Got a call today from the landlord. An exit survey, basically. Then I got a call a couple hours later, telling me that they're showing my apartment tomorrow (er... the 8th).

Guess "cheap and in town" makes an apartment pretty popular. I wonder how fast the guy'll run away when he actually sees the place.

Do I get to call myself a software developer now?

I've spent the last few days creating a VB app for work (nothing huge, importing a few hundred Word files and pulling the useful information out of them). But it actually makes an executable. And it has a dialog box!

*Gets up, dusts off a few electrons*

Well, everything should be up and running again. had a little problem with file paths changing on me, but it should all be sorted out now. The .com site is probably hosed, but I don't need that right now anyway. Back to the usual drivel tomorrow.

Well, if you're seeing this post, the domain's been transferred. More next week.

I'm in the process of transferring my domains over to another host (Blue Gravity, they're cheaper than Pair). Since the domain expires in five days and the transfer can take up to seven, there may be a period of a couple days when the site won't respond.

Anyway, to avoid losing data or possibly having to maintain two databases at once, I'm going to take a couple days off. I know, I know... what will you ever do without this daily bit of nonsense?