I put some pictures online from the weekend in Cleveland. Nothing really good, I just spent the weekend walking around and taking pictures. Showed off the camera to Mom and Jim earlier today, and they thought it was neat.

First thing Mom did? Ask me what the hell was up with the number pad. I don't know either, but it's a pain in the ass to use it. So now my camera's loaded up with pictures of the Christmas lights, the fire burning in the family room fireplace (Mom wanted to see if it could take the picture OK) and the dachsund looking very confused.

In other news, all my friends with laptops are probably going to start avoiding me until I get a new machine for myself, since I keep borrowing an IR port to upload the things.

In Akron? Check.
Turkey? Check.
Football? Check.
Shut off computer? Che... er... not quite yet.

Go enjoy yourself. This drivel will still be here tomorrow.

What was the first thing I did with my new camera phone? Get paranoid about my bald spot. Bad image quality due to me moving the camera slightly while it recorded. Maybe I'll put a set of clippers on my Christmas list, and hope people don't start rubbing my belly for good luck. 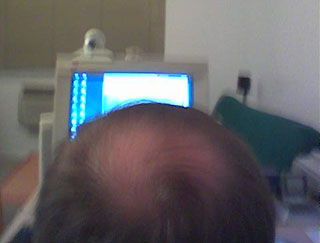 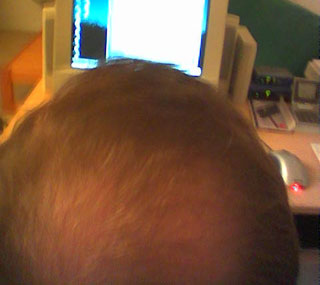 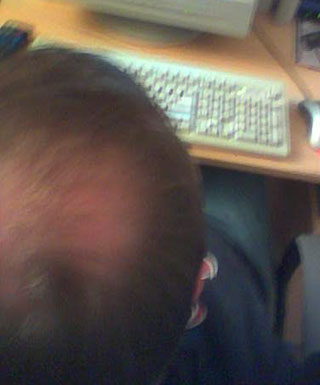 Note: Just in case someone came by before noon, I had a typo in the title. Mendel was the person who first studied heredity from a scientific point of view in the middle of the 19th Century. Mendeleev, who I had in there originally, was the Russian who assembled the first attempt at the periodic table of elements. In my defense, I was going off what I remembered from high school about 10 years ago, and the names are similar.

Rollin' on the River

Got a little rain the night of the 19th. A very large and slow-moving storm dropped a couple inches of rain all over the area. It was too much for the Allegheny to handle. So I decided to put my camera phone to the test. 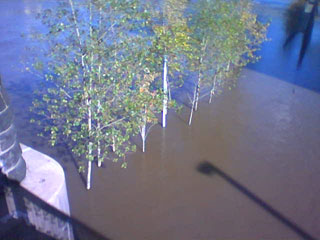 The riverside park near the 6th Street Bridge. The trees are under about five feet of water by my wild-assed guess. 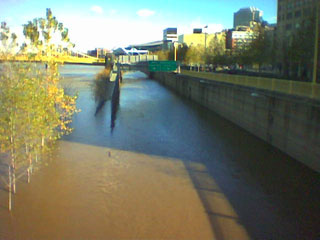 The 10th Street Bypass, looking toward the strip. 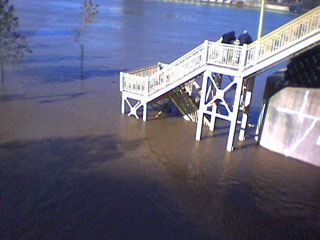 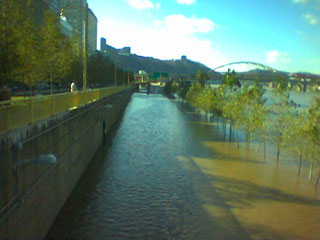 The bypass again, looking toward the point this time. 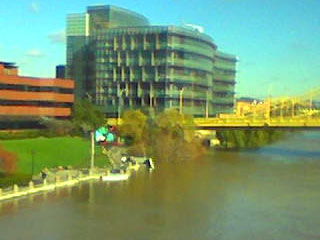 A small park on the North Side. It's hard to see, but there's supposed to be a set of stairs leading to a lower level.

Since I'm going out of town to watch the Browns play the Steelers in Cleveland this weekend I'm going to go out on a limb and make an actual prediction, even though the Browns this year tend to do exactly the opposite of what I think they'll do. Anyway: Browns 24, Steelers 10.

Saw a car on the way to work with a licence plate holder from Krebs Dodge. The guy should be selling bikes.

I don't like talking about football, and just use it as filler, but this is just too much to pass up. Cincinatti beat the Cheifs and Cleveland won 44-6 (!), while the Ravens and Steelers lost. (Actually, the Steelers got thumped.) This means that Cincy and Bawl'mer are in first place with 5-5 records (if the season ended today, I think the Bengals have the tie-breaker) with Cleveland a game back at 4-6, and the Steelers, of all teams, bringing up the butt at 3-7. It's like the division standings got turned upside-down from last year.

Turns out there were more residents in Htet Htet's apartment than I thought -- a mouse decided to make itself at home. After watching it run back and forth along the outside wall for a couple weeks, she finally decided to do something about it. We managed to corner it behind a shelf in the kitchen, then she flushed it out into the plant pot I was holding at the other end.

I was ready for a game of Mouse Hockey, but she got all life-is-sacred on me and wouldn't let me kill it. So I had to walk downstairs to the dumpster, covering the pot with a magazine so he couldn't escape, and release the disease-ridden vermin. 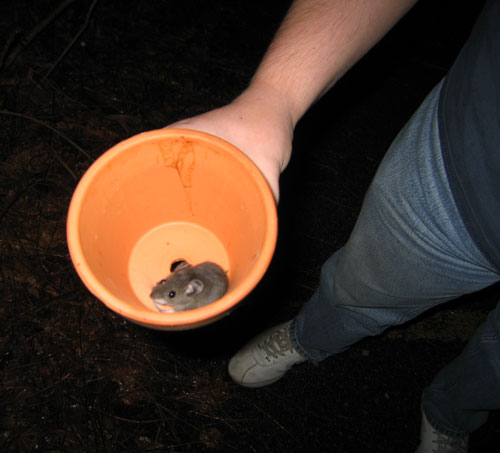 There he is, looking at us with his beady little eyes. Looks like he found out he was getting a reprieve. 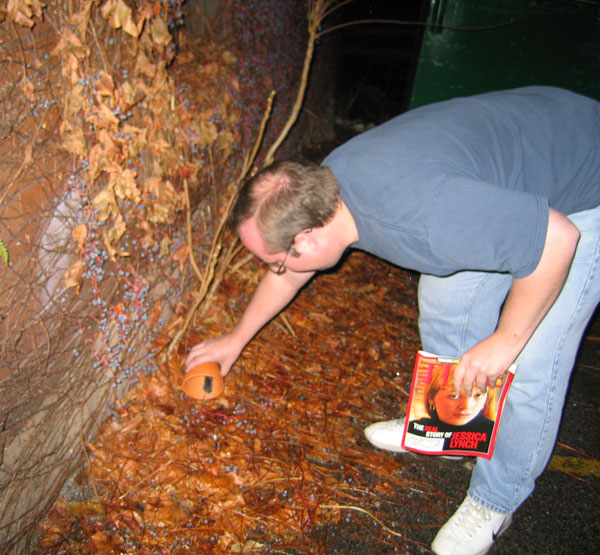 Letting the little poop machine go. He actually didn't want to let go of the pot; the smug little bastard probably thought we were giving him a new house.

Wow, these last few updates have sucked. Working that hour of overtime every day is just sucking the life force out of me for some reason. Well, that and the fact that I'm spending my work day reading manuals. I haven't even been working on the client project, though in fairness I gave myself until Thankgsiving to take care of that and I only have a couple pages left to program, followed by what's left of the bug-fixing.

I just don't have a lot going on right now. There's the Steelers game in Cleveland a week or so from now, then Thanksgiving after that, but nothing else. I've been trying to collect up enough spam for make-fun-of-the-stupid-subjects post, but the spam volume has dropped off and what's left is just your standard "H0t TeeN Slutz" type stuff.

I s'pose it's been a while since I've been all angsty and introspective. Maybe inspiration will strike at 3 in the morning. For all our sakes (mine trying to write it and yours having to read it) I hope not.

Heavy-duty winds, snow, and... lightning? If the sun had been peeking through we'd have had a Louis Black routine.

I think I've come up with a new slogan for Cozumel restaurant that will bring people in droves: "Mexican food that won't destroy your liver."

Well, I've got this day off for Veteran's Day. So what am I doing? Getting the oil changed in the car. I'm a wild man, I tell ya.

As a side note, the Browns (3-6) got pasted by the 9-0 Chiefs in a game that surprised nobody.

Well, My Mind's Made Up Now

Walking to Subway for some lunch last week someone gave me a candybar with a business card stuck to it. Turns out it was a "vote for me card" -- Wesley Clark's supporters were handing out Clark bars.

That's it; I'm voting for the guy. Never mind that he's even hypocritical compared to other politicians, that he has no platform whatsoever... his people gave out candy! Lucky for him that Senator Snicker and Governor Butterfinger aren't in the running.

In the election for County Executive, Jim Roddey lost his re-election bid. This means that the Democrats now control both the county council and the executive's office. The same Democratic Party that's controlled Pittsburgh's city council and mayor's office since time immemorial. And we can all see what a wonderful job single-party rule has done for the city. Idiots.

It's amazing how much later 6:00 seems to be now. I've worked late several times in the last few months to make up for things like dentist appointments, but that was all during the summer. Now when I leave it's already dark.

That year off must've had an effect on me; I don't think I ever really noticed it this much in the past.

Tuesday night is an election, although I can't think of anyone other than the County Chief Executive that's up. Guess I should go look it up.