News flash: One less terrorist in the world.

Not Quite a News Flash: Francisco Franco still dead. Now back to your regularly scheduled programming.

A few maps for your viewing enjoyment.

Electoral votes by state. Only three states (New Hampshire, Iowa and New Mexico) voted for a different party than they did in 2000. From CNN wihout permission. 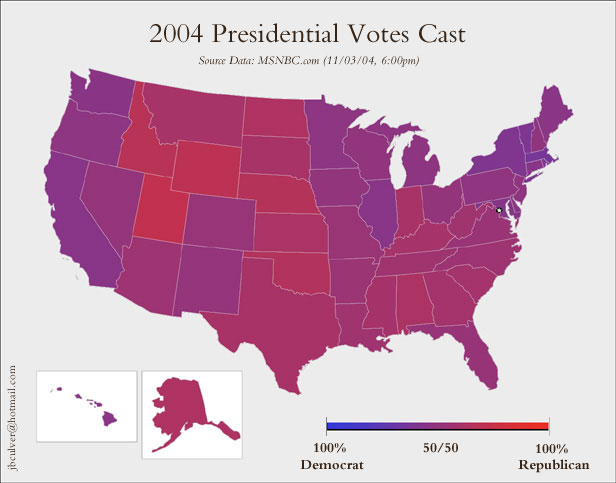 Percentage of votes by state. Full red is Bush, full blue is Kerry. Note that most of the country is basically medium purple. From Boing Boing without permission.

Blue vs. red by county. Note how much of the country is actually red in this map; essentially the only place Kerry enjoyed widespread support was in the Northeast and in cities. From USA Today without permission.

Counties, colored by percentage each candidate received, with a 3-D effect to show population. This shows a little more effectively how Kerry made it close by appealing to populous areas. From Princeton without permission.

And finally, a look on the lighter side:

The United State of Texas. No word yet on whether the inhabitants of New America or Baja Canada would have to watch hockey or end sentences with "eh." But we would get slightly improved beer. From Not a Dollar Short without permission.