For those who don't keep track of the oddities of Pittsburgh news, I present the story of Bubba. Bubba was caught not too long ago and showed up at Wholey's shortly afterward.

Bubba was a bit of a freak -- having been around for 30-50 years, he weighed in at 23 pounds, compared to the average lobster's 1½. PETA pleaded with Wholey's to let their freakisly-large lobster return to the sea. The PETA I'd become a member of -- People for the Eating of Tasty Animals -- offered up 500 smackers for the privelege of turning Bubba into a feast. 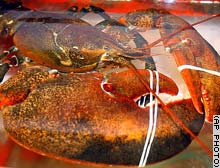 Wholey's, sensing there was publicity to be had, sent him to the Pittsburgh Zoo's aquarium for quarantine and observation. Bubba died the next day after not eating anything.

The PETA I wish would go take a flying leap is pulling their hair out over this; ashamed on behalf of all humanity that the giant bug wasn't returned to his home. The good PETA is upset that the meat is ruined, but Bubba was probably pretty stringy to begin with due to his size and age.

Now, my issue is not with the handling of the situation: People saw a freak of nature and wanted to study it. And bad-PETA is required to publicy piss their pants any time someone intimates that amoebas aren't at the same level as people. 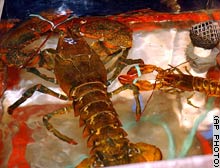 But c'mon, people... lobsters? They're basically giant insects. (Well, I'm pretty sure they're really arachnids, meaning they're related to spiders. Same basic idea.) They have a lot more in common with tarantulas and roaches than they do with Fido. We're not even sure the things have enough neural matter in their heads to be capable of feeling pain, never mind pining for their lost homes on the way to the dinner pot.

Some bad-PETA twit said that we should treat all animals as individuals. And in the case of lobsters, I do. With the exception of Bubba, each lobster I've ever seen is just right for an individual serving.

Edit, 2:53 PM: Picked the wrong word for spider-like critters. Arachnids are what I was thinking of (hence the movie Arachnophobia). Arthropods, which is what I wrote originally, are actually a larger group of organisms, containing insects, arachnids and crustaceans.