Not because I accidently set one of MySpace's bajillion servers to have its cookies blocked. And not because Firefox doesn't give me a way that I can find of saying "allow from *.myspace.com". Nor because MySpace's response to having cookies shut off is to puke all over the screen.

No, I hate MySpace because they're mean.

So yeah, I have a MySpace page for the same reason I have a LiveJournal. So I can talk to friends who are on MySpace. I won't actually use the thing.

Which is probably why it thinks I don't have any friends.

Yet another item in my continuing series of crap I'm too lazy to write a full entry about.

· Talked to the collections agency; Verizon removed the account from collections. Talked to Verizon and it's all taken care of. The DSL department even owes me money. Nice. That's been fixed up since December 27th, or just under a month. What's my credit score now? 668. The update hasn't made it through to the credit bureaus yet. I think I need to work on that.

· Got our first snow of the season over the weekend, and the idiots were out in force Monday morning. There was a Manassas Park city cop sitting on Manassas Drive making sure people were driving safely. Numbnuts flashes his high-beams at me and motions for me to slow down. How fast was I going in a 25 mph zone? 28.

· Still on the diet. Down to 226 now. Weight loss seems to be about a pound a week anymore, which I'm pretty sure is what it's supposed to be. That means I'll hit my target weight some time in February... of 2008. For those of you interested in exploring the exciting opportunities of being 60 pounds overweight -- not being able to find pants in your size, having to strain to touch your toes, people mistaking your navel for a blowhole when you float on your back -- I gotta tell you it's not all it's cracked up to be.

· I'm going back to Katsucon in February (of this year). All in all I had a pretty good time at the last one, and now that I know there'll be a couple of my friends there it should be better. Even have my own camera this time.

· Speaking of my new camera, Fuji CCDs seem to be sensitive to the near infrared. You can buy filters to attach in front of the lens to filter out the visible light and make the IR appear in grayscale. This sounds like it would be really handy for the con, but the price of the filter makes it a little less worthwhile.

· Things are still on track for leasing a new car in May. I may even have my credit card paid off as of my March payment. I remember the days long ago when I didn't carry a credit card balance month-to-month. I kid you not, I haven't done that since January of 2002. Being out of work for that year really sucked, in more ways than one.

Well, I Should Probably Write Something

Hey look, it's the 21st of January and we finally got some snow. Of course, the National Weather Service here are a bunch of pansies: There's currently a Severe Weather Alert for NoVA because we're going to get... wait for it... two inches of snow.

That's right: Stock up on non-perishables, gas up the generator, and clean and load the guns -- we're getting a dusting and by god you never know what will happen then. Southerners are such a bunch of pussies.

Sadly, I've heard the sirens go past the apartment twice in the four hours I've been awake, so apparently receiving a little snow really is a call for panic 'round these parts. I can't imagine what would happen if we got the kind of weather that would close the schools back home -- would the goevernor declare a state of emergency for 0°F? Call in the National Guard for a half a foot of snow?

The apartment I hated was pretty drafty in the winter. I thought this place was much better -- sure, it was kinda cold at my computer desk, but it's right next to the window. I mean, if I spin my chair partway around I bump the blinds.

But this winter I decided to put up the plastic sheets again to block out the cold. But at least there's no draft, right? Ummm... 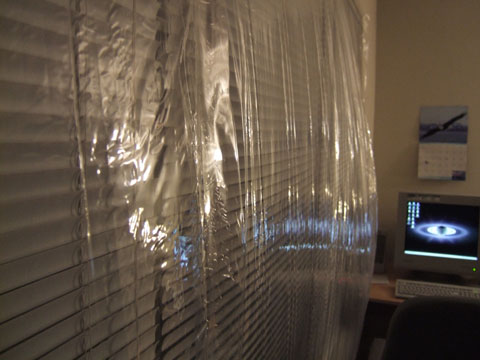 I sat down in my chair yeasterday at work. Nothing about this activity should make it anything other than completely mundane. I mean, it's a chair, right?

The dang thing broke in two, snapping where the seat part meets the on-wheels part. As the chair tried unsuccessfully to fold itself in half, I whacked my head on the desk (I have a nice knot there now). I'm using in a borrowed chair for right now, with no armrests. But since it isn't worn out like the old one was it's actually doing a better job of supporting my back.

Y'know, if I wasn't already on a diet I think that would have been a good signal to start one. But still, I sat down and the chair broke. Not a good way to up one's self-esteem.

(And the diet? 228 pounds now. And since the number of points I get to consume in a day is partially based on floor(weight / 10) I now get to eat just a little bit less.)

I got an e-mail asking me if I'd lost any weight on the diet. I hauled out the scale, figuring that maybe I would have dropped a pound. If I was lucky.

230. From 236 a week ago. And I didn't start until Wednesday. Now in a way I'm not surprised there's a lot of weight loss at the start. The way Weight Watchers works is that you're assigned a number of points you can fill any way you want, with the total determined by your age, activity level, gender and weight. I currently get 35 points (I'll drop to 34 when I hit 229) and I was probably eating close to 50 before I started.

I've noticed that I still get a good number of my points at work -- breakfast and lunch. I eat less in the evenings and don't really wake up any hungrier. So this seems to be working out pretty well. I just need to figure out how to coast in to my target weight when I start getting close to it.

· Doing well on the diet, but in all fairness I've only been doing this since the 3rd. No weight lost just yet but I'm not feeling half-starved like I was last Wednesday.

· On the topic of my other "resolution", May's a five-paycheck month so that'll probably be when I lease the new car. Turns out the six-speed on Hondas/Acuras just adds a first-and-a-half gear instead of a sixth gear with an even lower ratio. So the six-speed is essentially useless for me. Kinda sucks, and it basically takes the Accord V-6 out of contention since the only way to get the V-6 and a manual transmission is to get the worthless six-speed for a total of 27,000-some-odd dollars. So I'm looking at Acuras but that's difficult because the Flash 9 player in Firefox doesn't work with their web site very well.

· NFL playoff note: Eli Manning has surpassed his big brother Peyton. Eli's already much better at choking in the playoffs.

· Got my Virginia tax return over the weekend. With no freelance work to generate 1099s, I'm looking forward to having a very simple return for a change.

· I made a mistake signing up for the online page-a-day calendar this year. Sudoku doesn't work as well on paper as it does on a computer screen. Where I usually get online puzzles right the first time, I wind up going down blind alleys with the printable versions and just crumple up the page and throw it out.

Yep, time for another yearly installment of Crap I Ought To Do But Probably Won't.

Lose Weight. Hey, this one keeps coming up, doesn't it? As of Saturday I weighed 236 pounds. My goal is 175. I could live with 185. The mechanism this time is Weight Watchers, courtesy of some materials I didn't pay for. (Hm, maybe I ought to add "No Pirating" too. But I think resolutions should only be things we intend to keep.)

Anyway, the idea behind this one is to lose weight slowly and without cutting certain foods completely out of your diet. Sounds crazy enough to work. In addition to a book that lists common fast-food selections with their "point" listing, they also give a little slide rule-type thing that lets you compare the Calories, fat and fiber in a serving of food to figure out points. As one of my friends said, maybe the trick is that you get tired of doing the math, say "fuck it" and just don't bother eating.

Buy/lease a new car. This one's more of a necessity than a resolution, since I don't think the car can pass inspection any more, but I'll put it here just so I can succeed in at least one of these things.

Learn at least one of the .NET CLR languages. "Classic" ASP still has some life left in it, but it's been showing its age for quite a while. I really ought to start developing in ASP.NET, but I can't until I actually know what I'm doing. There was a .NET seminar I went to in Pittsburgh, when I worked at Brady, before I started blogging and when .NET was still a new and exciting thing. I remember not being terribly impressed with it then, but I may have been missing something. So I'll give it a shot, if I ever remember to look online during a time when I can actually sign up.