Maybe Not the Best Route to Take

... I-81 was just a little bit too interesting. First I had to stand on my breaks to avoid rear-ending the guy in front of me, and the guy in teh truck behind me had to swerve into the shoulder to avoid rear-ending my car. Why all the brakes? Because some truck blew a retread and left a giant chunk of tire in the middle of the highway.

Then I had to signal an SUV that had part of said retread wedged under the vehicle and dragging on the asphalt, causing lots of smoke and burning-rubber smell. Everyone else just thought this was OK; after all, it wasn't their cars that were liable to catch on fire. Not sure how much information I was able to yell across the lane at 80 miles an hour, but I at least I conveyed "pull over" to them so they could inspect their vehicle.

Then I got to dodge a couch sitting in the middle of the highway. Well, it is a long drive, and maybe someone needed a rest. Got to see a bunch of teenagers running down the berm to try to retrieve the sofa (it looked like it somehow fell out of a puckup) as I passed.

All that within about a five-mile span. Not sure the time I saved was worth the added stress.

Or, maybe it was all coincidence. But that would make the story even less amusing.

It's your day off. Go outside.

[Typing this in again; Blue Gravity shut off register_globals, which the BF back-end depended on (hey, I'd never written PHP before). After a quick fix to bring things in line with Not Being Stupid, this time it should stick.]

It's come up in conversations before that I used to have braces on my teeth. This was back in the sixth grade, so the ol' metal-mouth didn't get me picked on. At least, no more than the buck teeth I'd had before.

When I first started going to the orthodontist they took casts of my teeth to determine a strategy for straightening things out. They also gave me a "souvenir" cast that showed the front of my mouth. When I was cleaning out the storage locker back in Akron last year I found the old cast.

I just now got around to taking pictures of the thing. Hence the "mental backlog" part of the program. 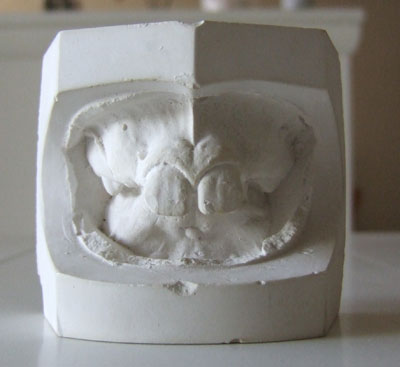 Front view. Hey, aren't people supposed to have four incisors on the top? 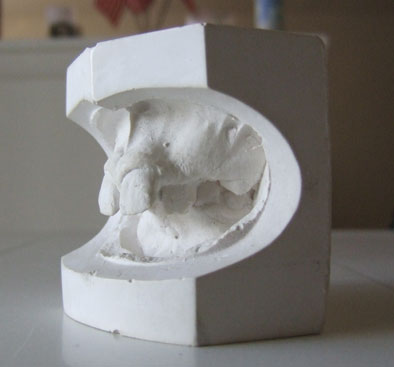 Three-quarter view. Oh, there they are. Behind the middle two. Yes, my mouth really was that screwed up. 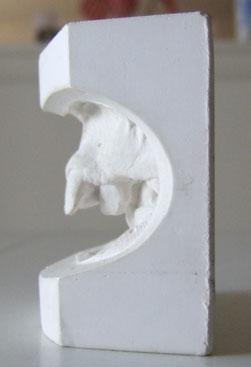 Side view. Now you can see just how far the front teeth stuck out -- I couldn't really close my mouth over them. Assuming I'm remembering correctly, and interpreting the jargon right, my two front teeth were 10 millimeters (a little less than half an inch) forward of where they should have been.

I wore the braces from the winter of sixth grade (1987-88) through the beginning of my freshman year of high school (1990). I wore a removable retainer on my upper teeth until my sophomore year of college; the non-removable retainer on the lower teeth didn't come out until I graduated from college.

Things have moved around a little bit since then, but I can still close my mouth so I think I'm OK.

Had to put a lot of effort into not laughing like a fool while I was at work Wednesday. Y'see, over at The Daily WTF they were making fun of someone who copy-pasted the wrong definition for an abbreviation into a list of media file types.

But that got old quickly, so the readers decided to show what you get when geeks start making poop jokes.

Diet milestone time: I've dropped to 200 pounds again (for you metric types, that's 200/2.2 kilograms -- I ain't doing the math for you). Not only does this get me back to the sane side of a nice, round number, it also means I'm more than halfway to my goal now: Started at 236, aiming for 175. Thirty-six down, twenty-five to go.

I've finally gotten to the point that I don't want to chow down every chance I get; when I was buying the car Saturday I realized that I hadn't eaten all day (I usually get some breakfast at about 2:00, but I was buying the car instead). Factor in having to go into work to publish something to the web (it was closer than going home, from the VW dealer) and I didn't wind up eating until close to 9:00 at night.

Time to inhale some food, right? Not really: After an appetizer I barely finished half of the (admittedly large) dinner I ordered. Same thing happened at breakfast today; I wound up leaving half my French toast on the plate when I was done.

In a way I'm glad, since that makes it easier for me to stay at my target weight. On the other hand I almost feel like I need to start ordering off the children's menu.

What I Did on Saturday

Seeing as how a picture's worth a thousand words, 4,111 words follow. 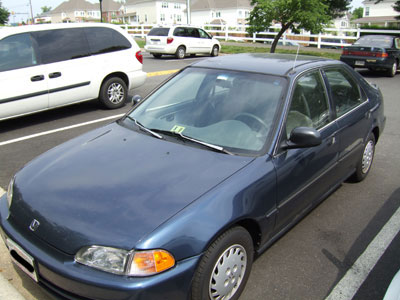 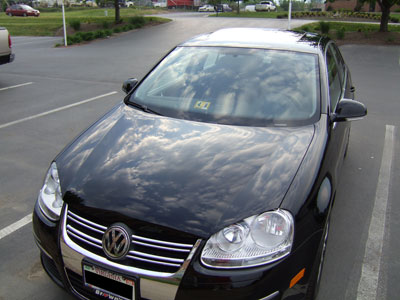 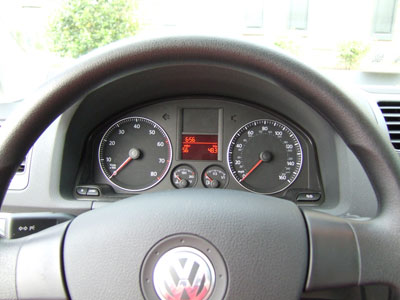 Tach on the left, speed on the right, temp and fuel below. Yes, the car had less than 60 miles on it, total, at that point. The red thing in the VW logo on the steering wheel is the reflection of my shirt. Shiny... 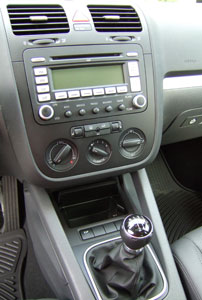 AM/FM/CD/Satellite/MP3 on top; climate control, including A/C and heated seats in the middle; six-speed manual shifter (also shiny!) on the bottom. Also visible in the corner: leather seats. Not pictured: moonroof.

Does 80 in 6th gear without even breaking a sweat. I foresee a lot of taxes with this car if I'm not careful.