I've had my Verizon phone for about five months now and have taken a handful of pictures with the camera's phone. This includes geeky stuff like amusing (to me) odometer readings and the end of the game where the Capitals won the Southleasteast Division.

I can't get the damn things out of the phone. MacOS's iSync program doesn't know how to talk to my Samsung phone, nor do any of the add-ons that I could find. I could e-mail the pictures to myself but that's kind of expensive.

Eventually the relevant coders should figure out how to talk to the thing and you'll be inundated with pictures like the one I'll take when my car's mileage makes it to 12,345 -- the same as the combination on my luggage! -- and other stuff like that.

I'm sure people out there can be bribed to make sure this doesn't happen.

Been a While (Again)

Yeah, the blogging's pretty much come to a standstill... between the dog and just not having anything to write I guess that's to be expected. I mean, it gets to a point that talking about X annoying client at work is less preferable than nothing. 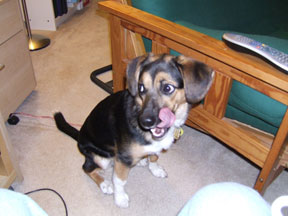 A little bit before they moved back to the area, Cory and Htet Htet bought a dog -- a beagle mix named Ginger. This seemed kind of odd to me at the time because Htet Htet already knew she was pregnant and it just seemed to be asking for trouble in the fall when the podling made its appearance.

Fast forward to January: The kid is two months old and Cory's parents, who had been helping out since the birth, were flying back to the UK. This left a deficiency in people able to care for the dog.

So, now I have a dog. She's grown a tiny bit since these pictures were taken (from 31 pounds to 34) but this is basically what she looks like now. The apartment, however, is a different story. Puppies like to gnaw on things when they're bored. Like cupboards, coffee tables, couches, dressers and bookshelves. 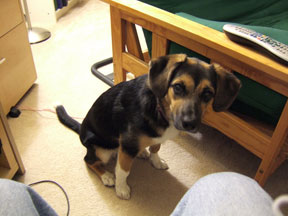 She's pretty much gotten over that now, and instead of being allowed to roam the apartment while I'm gone she gets locked in the kitchen via a baby gate. So far, she hasn't figured out that she can jump over it yet.

When I first brought her home, I found I was paying so much attention to the dog (making her feel like this was her home now) that I wasn't getting a whole lot of time to eat. I dropped to 176 pounds, which was within spitting distance of where I wanted to be.

Then we got into a routine and I had more time to shovel food down my gullet. And since I was taking her for three half-hour walks over the course of a day (thus burning about 300 Calories) my system responded by eating more... about 700 Calories per day. Oops. I'm back up to 184 now, so it looks like I'll need to start watching what I eat again.

You'd also be amazed at how many cleaning products you amass by having a pet. A large bottle of Febreeze, a bottle of pet stain remover (see also, "dog no longer allowed to roam during the day," above), a bottle of Resolve and a bigger vacuum cleaner have all made themselves required over the last couple months. 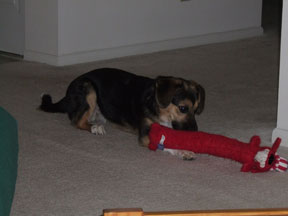 Beagles are hunting dogs, and she tends to show it when I take her for a walk -- when she sees a squirrel she can generate an amazing amount of pull for such a little critter. This also means she tends to be kind of rough on toys. The red guy ("Bobo") you see her working on here lasted about three weeks before she'd ripped his guts out so many times that I couldn't repair him. His successor, blue instead of red, lasted six days before suffering a severed carotid that I couldn't tape up.

She now has a rope toy that's on its last legs, a bone that's lost a bit of weight since she came here, a squid/octopus that's proving to be far hardier than Bobo, and a tennis ball that stubbornly refuses to die.

The tennis ball is the funny one: When I get down on the floor to play fetch with her, she'll bring the tennis ball most of the way back, then drop-kick it to me. Makes me wonder which one of us is playing with the other...

Of course, when I try to show off how smart the dog is at the dog park by throwing one of the communal tennis balls, she chases it down then gives up -- almost like she's saying, no way in hell I'm putting that nasty thing in my mouth. Given that I can barely stand to pick one of those balls up myself sometimes I can't really say that I blame her.

All in all it's been a positive experience for me. It's nice to have something that's happy to see me when I get home from work, even though I have the sneaking suspicion that it's because she needs to go to the bathroom and I'm the only one that can get her outside. I also have yet to see the whole "women like puppies" thing in action. This is the dog's fault, right?